a group of lines forming the basic recurring metrical unit in a poem;

Perhaps we enter a text the way we enter a room. Sometimes we barge in and cross the threshold of the first sentence quickly. Or we sidle up to the text and have a peek inside at the lines before committing to moving all the way through. The multiple connections between literature and architecture touched upon in this anthology are the result of a year’s examinination of what it means to read – and write – the city in a collaboration between Thursdays Writing Collective and  MLPPROOSTEN|ARCHITECTURE.

Our methodology was partially inspired by the works of thinkers such as Michael de Certeau and Henri Lefebvre, two writers who explore the idea of physical space and how it relates to the concept of self. Other facets of our practice evolved from the particularities of our environment.

Thursdays Writing Collective is a non-profit creative writing program for residents of Vancouver’s Downtown Eastside, an area within the most expensive city in Canada that is contested, and has been for years, on several levels. Space is an issue here. The city itself sits on unceded Coast Salish land in the traditional territories of the Musqueam, Squamish, Stó:lo and Tsleil-Waututh nations.

Housing is a major concern in this area, where welfare rates are eaten up by rent in unsafe, infested Single Resident Occupancy (SRO) hotel rooms. These homes are highly regulated in some respects (the management doesn’t allow residents to bring friends upstairs) and abandoned in others (infestations and repair issues are notoriously ignored.) Lack of privacy exacerbates violence.

With no indoor space available, the sidewalks of the neighbourhood becomes a living room where personal exchanges play out. The neighbourhood, which is made of diverse populations, struggles with developers intent on monetising the area they perceive as ripe for gentrification. Condo sales centres trumpet amenities that have nothing to do with many of the current residents, approximately 65% of whom are living below the poverty line. 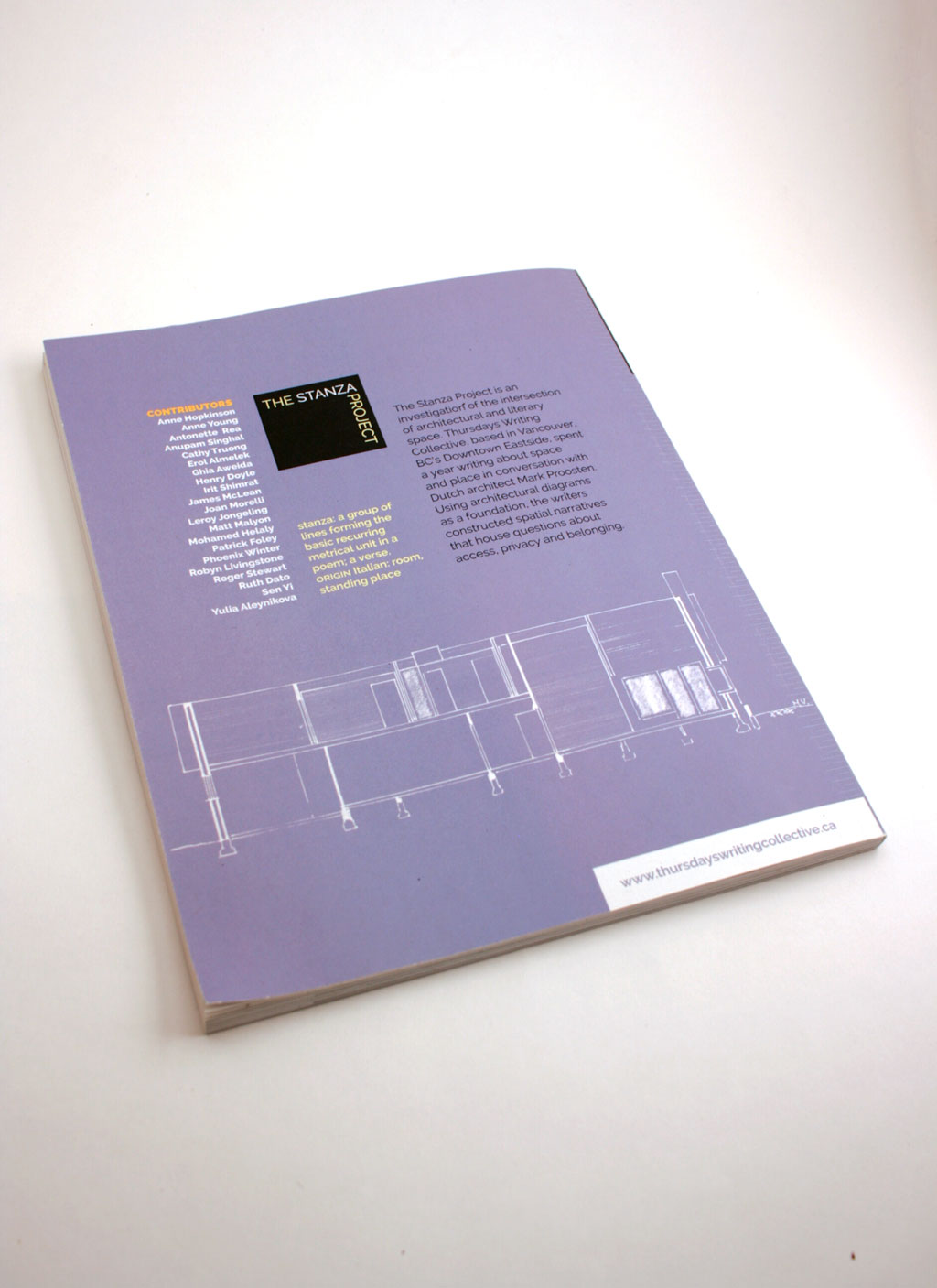 According to the Oxford dictionary the word home originates from the Old English hām, related to the Dutch heem and German Heim. Although in Dutch the term heem is completely forgotten, the grammatical use of the word house within the English language is very rich. The word home can be used as noun, an adjective, adverb and verb.

The word home is always used in relation to other words. A home is not about bricks, windows or a roof. These architectural characteristics can be used to describe an object addressed as home. The concept of home exists through the relationships between oneself and a particular environment. This environment is not static but is in a constant state of transition. Our home could have been a suburban house, with a perfectly green lawn, yet we can exchange it for an apartment with a crack in the floor and inside find a compelling relationship with space.

This publication, and the five other Thursdays’ chapbooks, are home to some of the richest spatial stories that I have come across. I was introduced to these works by Elee Kraljii Gardiner at a conference in Prague where we started to think about how to collaborate within the frame of our idea, The Stanza Project. Because my own research is devoted to the relationship between literature and architecture, the collaboration became a researched-based project of writing and designing, exploring the spatial qualities within words, the urban environment and the home. We examined the notions of shelter, housing, home, indoor/outdoor and accessibility, writing our way through these ideas to create a home in the text, building a spatial literary environment.

Architecture and writing seem to be two different disciplines that have no common relationship. Poetry and fiction differ from architectural drawings, buildings and the urban space. Creating a home in the text could be seen as something completely different than drawing up a house or an urban plan. Nevertheless, when we positioned these two disciplines together we started to build spatial narratives.

The selection of work made ready for this publication contains multiple characteristics that address the spatiality of language or the concept of space. There are dialogues between the writers that occur on some odd sizes of paper, ranging from the size of a business card to a strip of a few meters. These restrictions – or opportunities – have led to the use of different language as influenced by orientation and scale.

Another interesting dialogue came from the combination of drawing and text. In the architectural or urban plan, text is always used to describe the utility of a room, the materials or a building’s typology. But when the writers were confronted with these drawings and had to use them as their writing paper, they opened up a dialogue between their text and the rooms, re-claiming space.

The topic of claiming space or squatting in rooms of text is what we mean by the technique of “wordsquatting”. As it relates to claiming physical or urban space the need to have one’s writing be read by others struck me. Building a space for that to happen is extremely valuable. By writing, drawing and re-writing we have built up homes – homes constructed by the relationship between people and their direct environment. That’s what architecture should be about. 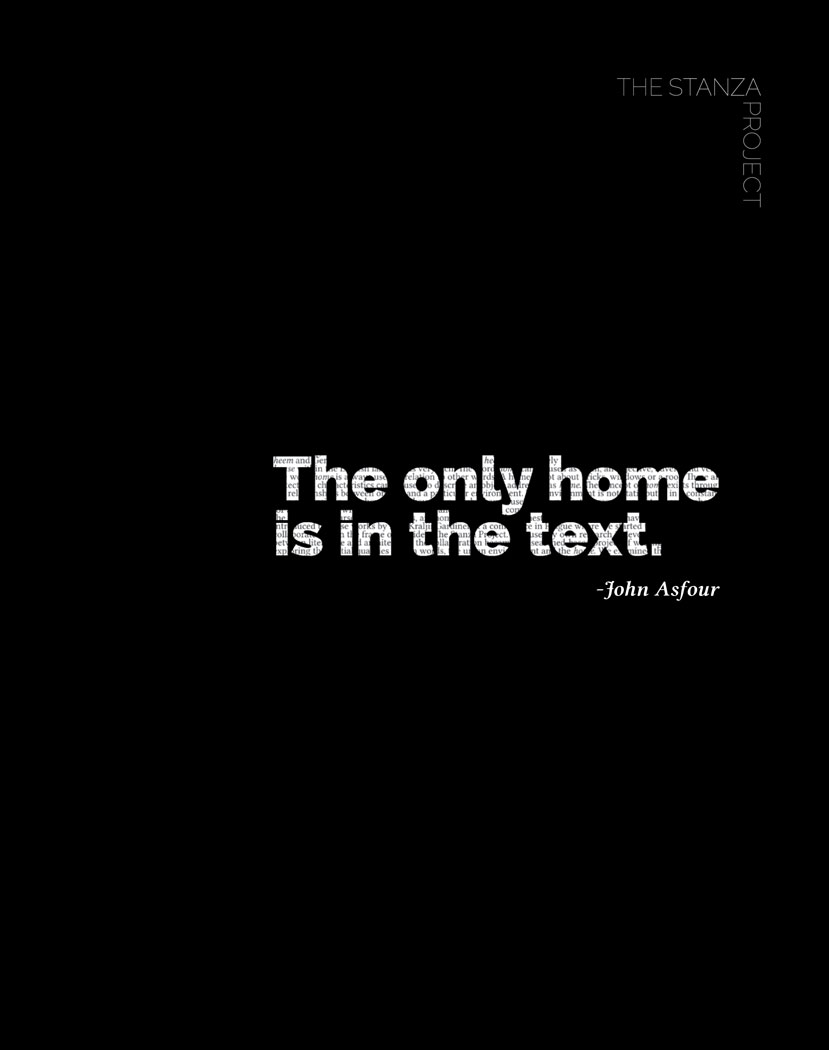 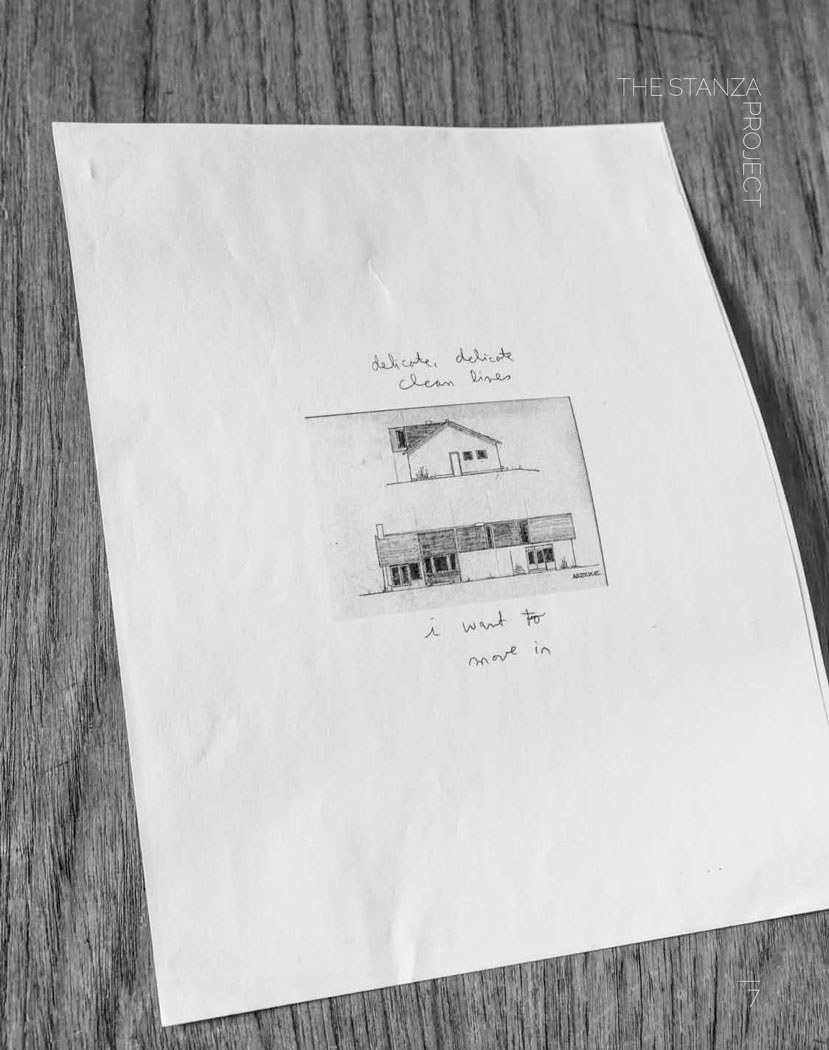 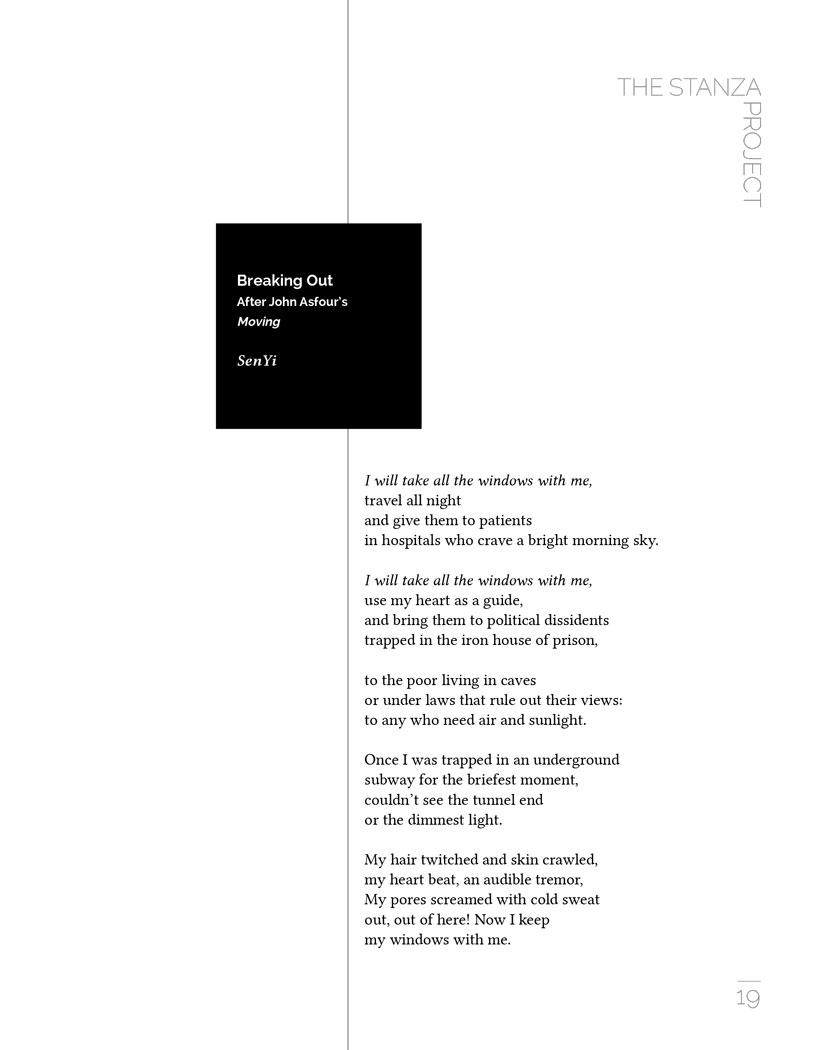 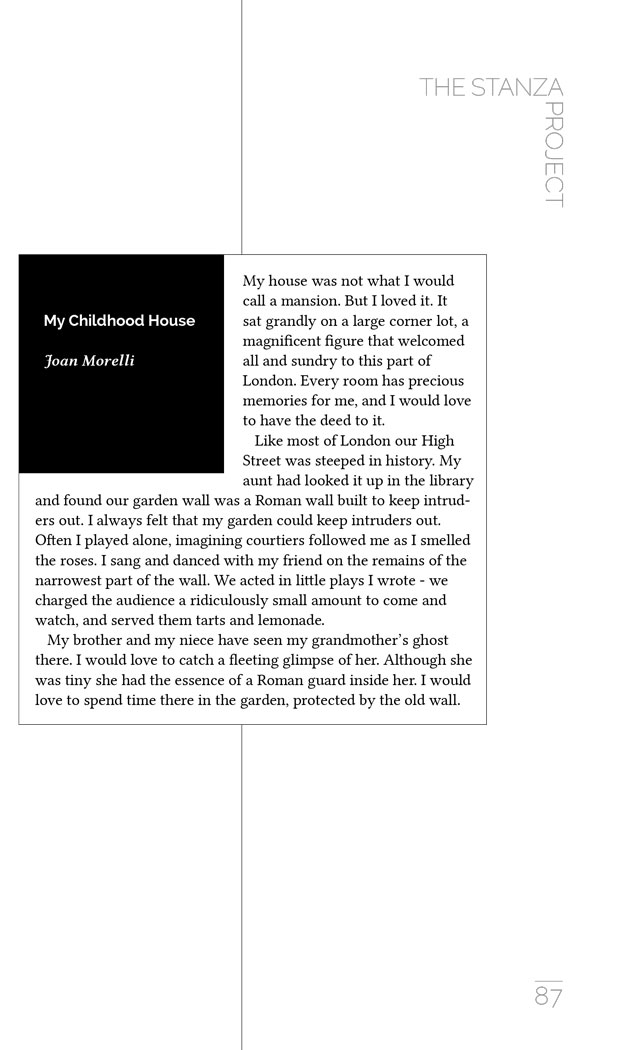 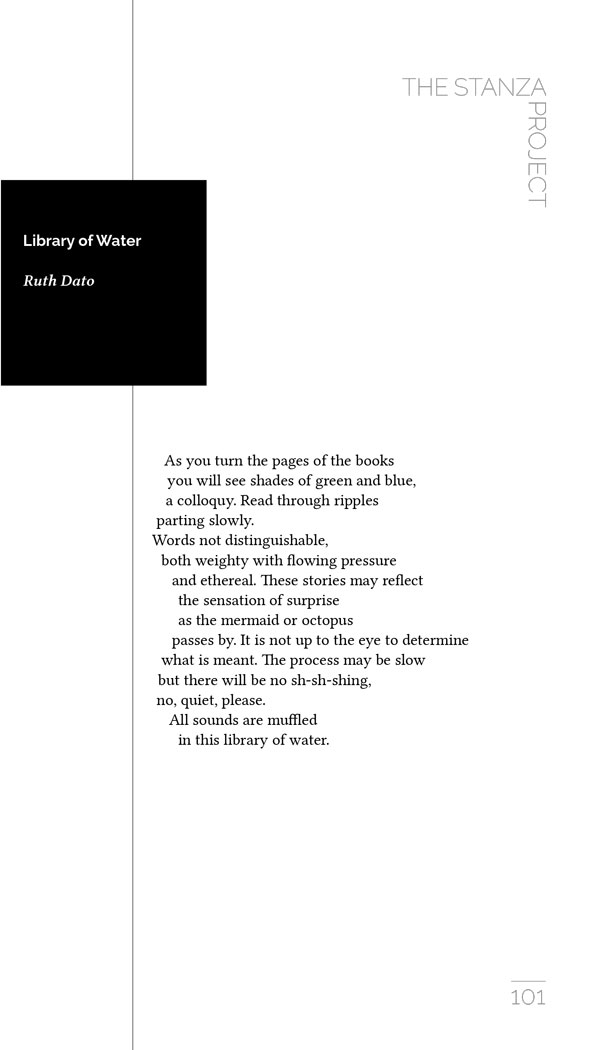